In my book Folkungar & Korsriddare (The Folkengis & the Crusaders), which was published in 2006, as well as in the 2005 edition of Traditio Melitensis, Bulletin of the Scandinavian Association of the Order of Malta, I have dealt with the history of the Order of Malta since its coming into being in Jerusalem around 1050. With the bull Pie postulatio voluntatis of 15 February 1113 pope Pascal II recognised the independence of the brothers at the St John Hospital in Jerusalem as well as their right to select between themselves the Master, which title came to develop into the title of Grand Master. The bull was dispatched to Blessed Gerhard, then being the head of the brothers of St John. Thus Blessed Gerhard is counted as the first Grand Master. He was succeeded by Fra Raymond du Puy (1120- c 1158/60).

In connection with the election on 11 March 2008 of the 79th Grand Master of the Sovereign Order of Malta, Fra Matthew Festing, I was looking through my books and archives dealing with the Order of Malta. There I found some photos which I believe could be of interest to the members of the Scandinavian Association, which, by the way, is celebrating its 50 year anniversary 2009. Therefore I dispatch these photos together with some comments. Hopefully the members of the Association will find this information of interest and value. 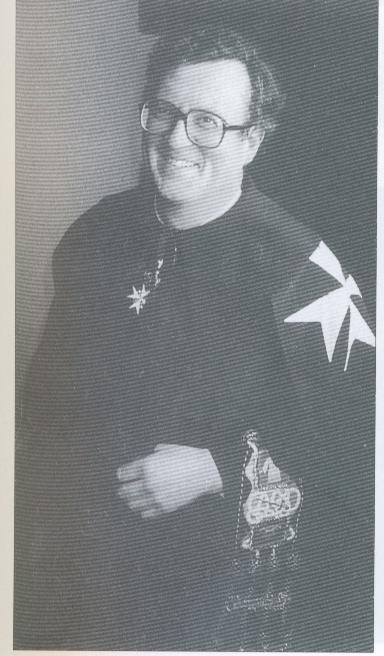 On 8 April 1988 the Council Complete of State elected the Englishman Fra Andrew Bertie to be the 78th Grand Master of the Sovereign Order of Malta and to succeed the 77th Grand Master Fra Angelo Mojana di Cologna. On the picture the new Grand Master is wearing the special coat with the cross and the flag with his personal coat of arms is carried behind him. Fra Andrew Bertie died on 7 February 2008. He was in office almost for twenty years. 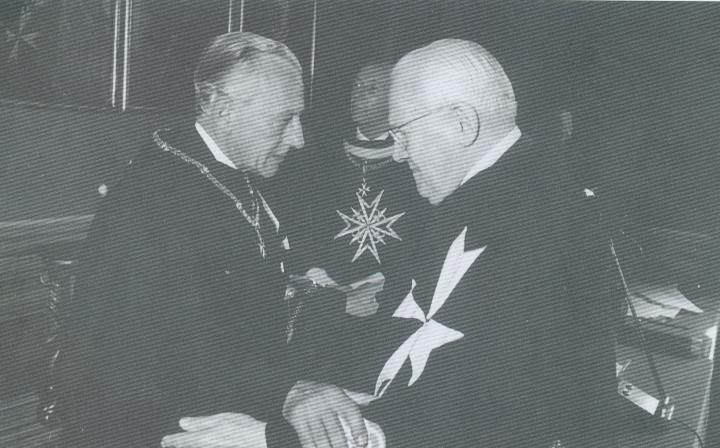 The new Grand Master Fra Andrew Bertie on 8 April 1988 greeting the Lieutenant ad interim during the vacancy on the post the Venerable Baili Fra Giancarlo Pallavicini.

As we have seen from the information coming from the Grand Magistry at Via Condotti Fra Matthew Festing is the second Englishman to become Prince and Grand master of the Order of Malta. It is quite remarkable that an Englishman succeeds another Englishman, the dead Grand Master Fra Andrew Bertie (1988- 2008). It was on 8 April 1988 that the Council Complete of State (the electoral body) elected Fra Andrew Bertie as the 78th Grand Master to succeed the 77th Grand Master Fra Angelo de Mojana di Cologna, who had died on 18 January 1988.

The 77th Grand Master Fra Angelo de Mojana di Cologna (1962-1988) had acceded to the post as Grand Master in 1962 after a long interregnum of eleven years (1951-1962) following upon the death of the 76th Grand Master Fra Ludovici Chigi Albani della Rovere 1951. On the picture the Grand Master is wearing the insignia of the Supreme Order of Christ, the most elevated papal order of merit.

The 77th Grand Master Fra Angelo de Mojana di Cologna (1962-1988) had acceded to the post of Grand Master in 1962 after a long interregnum of eleven years (1951- 1962) following upon the death in 1951 of the 76th Grand Master Fra Ludovici Chigi Albani della Rovere (1931-1951). At the death of the 76th Grand Master Pope Pius XII was for different reasons advised not to confirm a new grand master for the Order of Malta, while the Order of Malta was led by two lieutenants ad interim during this period, 1951-1955 by Fra Antoine Hercolani Fava Simonetti and 1955-1962 by Fra Ernesto Paterno Castello di Carcaci.

After the death of the 76th Grand Master Fra Ludovici Chigi Albani della Rovere (1931-1951) followed a long interregnum of eleven years (1951-1962) until the 77th Grand Master Fra Angelo de Mojana di Cologna (1962-1988) acceded to the post of Grand Master in 1962. On the picture the Grand Master is wearing the insignia of the Supreme Order of Christ, the most elevated papal order of merit.

Our new Grand Master Fra Matthew Festing comes from the post as Grand Prior of the Grand Priory of England, which post he acceded to in 1993. He became a Knight of Justice, also called a Professed knight, (with the title Fra’ or Frater) in 1988 and he took his perpetual vows in 1991.

Of course we know that the Grand Master only can be elected from the so called First class, which consists of the Knights of Justice or the Professed Knights, that is to say the knights having taken the perpetual vows, i e 1) the vow of obedience, 2) the vow of chastity and 3) the vow of poverty. It is a worrying factor for the maintenance of the sovereignty of the Order of Malta that the First class is a diminishing class, with a decreasing number of members. It is a sincere hope that the new Grand master will be able to enlarge this very important class when it comes to the sovereignty and independence of the Order of Malta.

Article 29 of the Constitutional Charter of the Sovereign Order of Malta states that at least five professed knights are necessary for the establishment of a Priory or a Grand Priory. The head of a Priory is called the Prior, or more common, the Grand Prior. The (Grand) Priory of England was as a matter of fact founded already in 1144 in Clerkenwell in London. It existed until it was suppressed in 1540 by Henry VIII. It was re-established in 1557 by Queen Mary and then, again, suppressed by Queen Elisabeth I. First in 1993 the Grand Priory of England was re-established with Fra Matthew Festing as the 55th Grand Prior of the Grand Priory of the Sovereign Order of Malta in England.

It is important to note that in England there also exists the Most Venerable Order of the Hospital of St John, which is a British Order of Chivalry established by the Queen

in 1888. This British order of chivalry is open to all British Christians, Protestants and Catholics alike.

In order to complete this picture it should be added that the Second class of members consists of Knights and Dames in obedience. In accordance with article 33 of the Constitutional Charter there must be at least nine knights/dames in obedience for the establishment of a Sub Priory. The Head of a Sub Priory is the Regent. If there exists only members of the Third class an Association is established, with a President as its head (as in the case of the Scandinavian Association). In case there does not exist a Grand Priory or a Sub Priory in the territory the knights or dames in obedience become aggregated in gremio religionis, that is to say they are attached directly to the Grand Commander of the Grand Magistry, who is the supervisor of the knights and dames in obedience.

From the 16th to the 19th century, persons guilty of so called Nonconformity, i e not adhering to the new protestant state church of England, came to be labeled “Recusants” and were subject to civil as well as sometimes to criminal penalties. Roman Catholics formed a large portion of the Recusants. The so called Recusancy laws were in force from the reign of Elizabeth I to that of George III. The situation in England resembles very much the development in protestant Sweden during the reign of Charles IX and Gustav II Adolph. “Recusancy laws” were in force also in Sweden, which actually lifted the ban as late as 1951, when the Law of Religious Freedom was adopted.

Through his mother the Prince and Grand Master Matthew Festing is descended from the Blessed Sir Adrian Fortescue, an English Knight of Malta who was martyred for his Faith in 1539. Without knowing that Sir Adrian would be an ancestor to a Grand Master of the Order of Malta the editors of the Traditio Melitensis 2005 printed at page 94 a painting of Sir Adrian Fortescue and the Prayer of Vocation: ”Blessed Adrian Fortescue, Pray for us”: ”Father in Heaven, I humbly ask you, to listen attentively, to my prayer for vocation, to the religious life, in the Order of St John of Jerusalem. I believe that Your Holy Spirit, wants to inspire young people, to be generous with their lives. Give them the courage, to say to You in prayer, ”Here I am, send me”. We make our prayer, through Jesus Christ, the Good Shepherd, who knows His sheep, and how to reach their hearts. Amen”.

Knight of Grace & Devotion of the Order of Malta